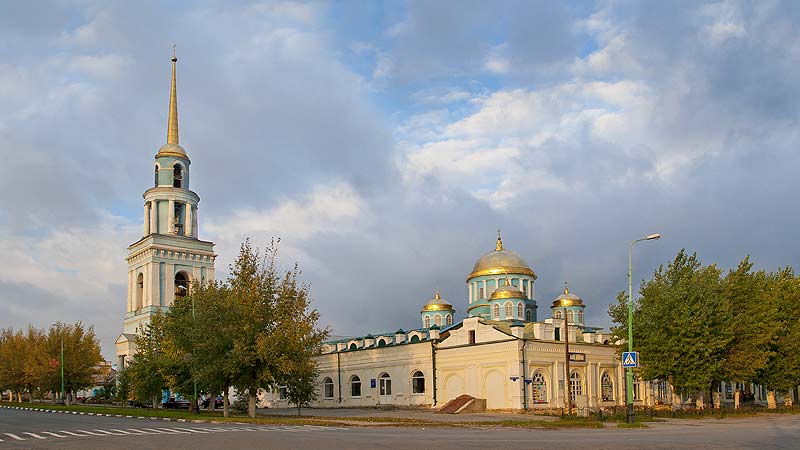 Until recently Lebedyan looked like a typical provincial merchant town almost untouched by the 20th century. The town’s architecture blends in harmoniously with its natural surroundings making for a comfortable and relaxed atmosphere. The main street Sovetskaya (formerly called Dvoryanskaya – Nobleman’s) is a wide straight avenue lined on both sides by old merchants’ houses and lime trees. The trees were planted in 1910 and provide the residents with shade and fill the air with their fragrance when in  blossom.

Among the most notable landmarks are the old two-storied residences previously owned by the well-to-do merchant families of Igumnovs, Popovs, Churilins, Strelnikovs. The merchant shops (Torgovyie Ryady), grammar school, municipal government (Duma) buildings are also key landmarks.
During the soviet period two of Lebedyan’s churches were destroyed and a further five that were closed down survive today and are currently undergoing restoration to their former glory.

The Old Cathedral of the Kazan Icon of the Mother of God (1771) marks the historical centre of Lebedyan and is located where the first wooden church of the town once stood. During the soviet period it was used as a warehouse and water tower.
The Church of the Nativity of the God’s Mother near the old bridge is even older and according to local legend was erected on the common grave of the 17th century Lebedyan fortress defenders. Its high bell tower was somewhat lopsided because of the shallow foundation  it was erected on as to have dug deeper than the original grave during the original time of construction would have desecrated the common grave below. The bell tower was later demolished in the 1930s.

The St. Nikolay Church is the only church in the left bank of the river and is currently undergoing restoration.
The Church of Transfiguration of the Christ can be seen in the old town’s cemetery. It was the only church in use from 1930 until the 1980s, and for many Lebedyan inhabitants it was the church in which they were christened.

By far the largest and most beautiful church in Lebedyan is the New Cathedral of Our Lady of Kazan. Like all churches in Lebedyan the Cathedral was paid for by the inhabitants who each gave as much as they could afford. The cathedral itself was competed in 1836. Later the refectory and the 60m bell tower were added. The Cathedral is located in the middle of the market square bordered on all four sides by the buildings of the Torgovye Ryady (merchant shops built in the second half of the 19th century) which together form the town centre.