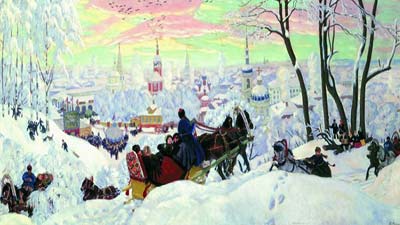 Lebedyan was the home of Eugeniy Zamyatin (1884-1937) – known by his anti-utopian story “We” and other short stories portraying the life of common people in small provincial towns like Lebedyan. He was born in to the family of the priest of the Church of the Protection of the Virgin and studied at the Lebedyan grammar school. Zamyatin’s original home is under reconstruction and is soon to be re-opened as a Literature museum.

Konstantin Igumnov (1873-1948) – Doctor of Arts, Laureate of USSR State Prize, Professor of the Tchaikovsky Moscow State Conservatory and founder of the world-renown piano school, “Igumnov’s School”. Konstantin was born 1 May 1873 in Lebedyan in to a family of famous  Lebedyan merchants and benefactors. He spent his childhood and youth in Lebedyan receiving his first piano lessons from his home tutor. His contemporaries knew him as a person of rare charm and generosity, genuine subtlety of soul and high culture and remembered him as an original and unique performer and a gifted teacher. A memorial plaque marks the house where he was born. A street and the music school are also named after him.

The Lebedyan Horse Fair attracted many famous people among them the famous Russian writer, Ivan Turgenev and his friend and painter, Petr Sokolov who visited the fair in the 1840s to paint the event. Petr Sokolov illustrated Turgenev’s “A Hunter’s Sketches” (“Lebedyan” is one of the stories) and one of the pictures “Horse Fair in Lebedyan” was awarded a Golden Medal at the International Exhibition in Paris.

The Lebedyan of the 19th and 20th centuries was a cosy recreational place attracting artists and writers. The famous Russian painter Boris Kustodiev visited Lebedyan in 1926 at the invitation of Yevgeny Zamyatin. Though sick and unable to walk at that time he completed a number of water-colours of the town’s landscapes, several of which are now held in the collections in the Pushkin’s Museum and the Tretiakovskaya Gallery in Moscow.

The author of the famous novel “Master and Margarita” Mikhail Bulgakov spent the summer of 1938 with his family in Lebedyan. During his stay he wrote the play “Don Quixote”.  At his request a small house was rented for him to work in where during the day he wrote by candle light sitting in a small room with the curtains drawn. In the evenings the family went for walks around the town and surrounding areas swimming in the Don, enjoying nature, the clean air and unhurried life of a provincial town.